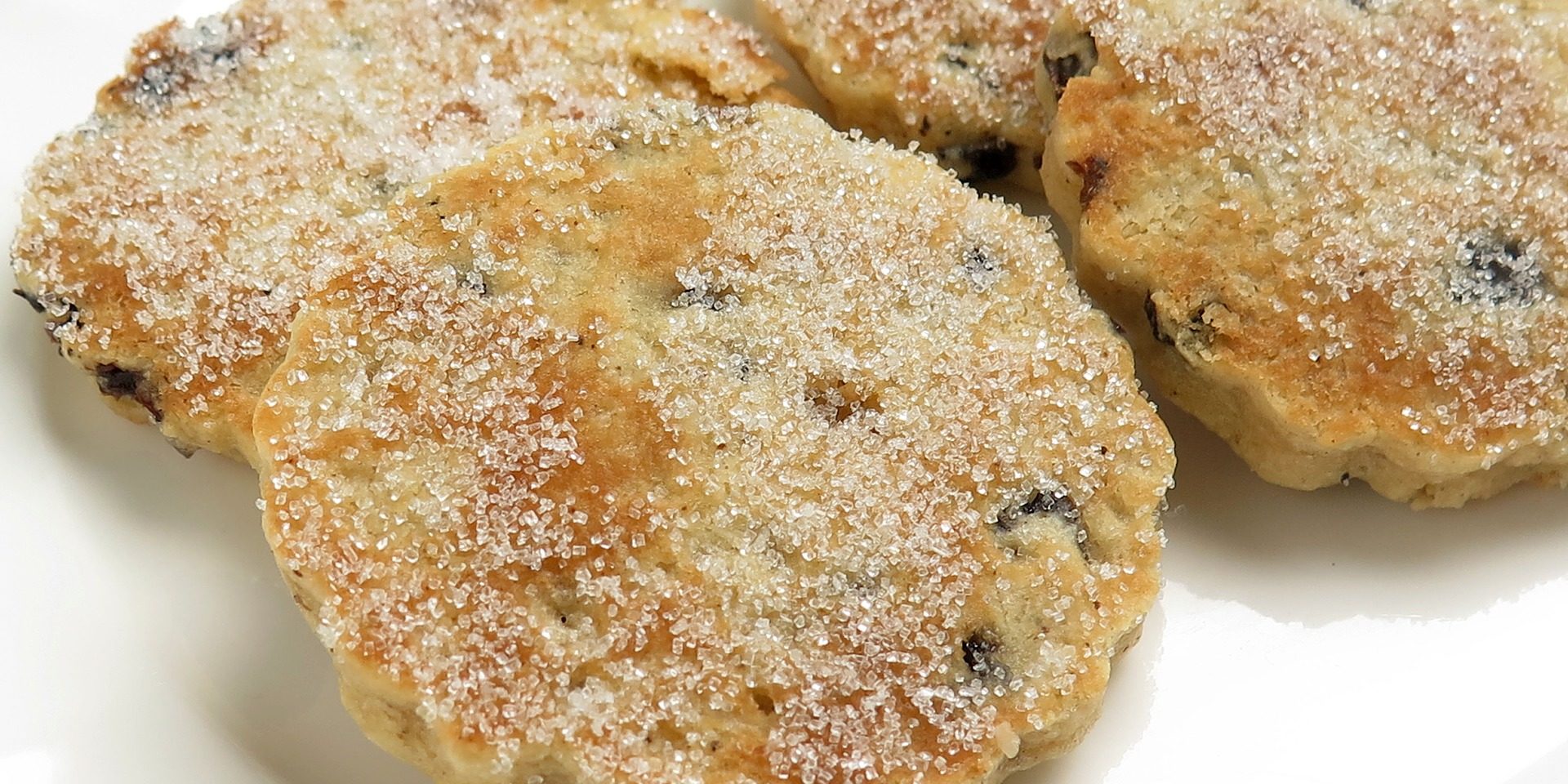 There are a variety of foods that can be considered as being really really Welsh. Obviously, Welsh cakes are one – and so is Welsh rarebit, and cawl. In fact, according to Food Britannia by Andrew Webb, cawl is Wales’ national dish. So if you’re looking to cook something traditionally Welsh for your visiting relatives, or you’re hosting a Wales-themed party in honour of St. David’s Day, here are the top 5 Welsh recipes to sink your teeth into. Aprons at the ready…

How to make Welsh Cakes

The first of our Welsh recipes is a firm favourite: Welsh cakes. Also known as bakestones or pics, they’ve been popular since the late 19th century. You can eat them hot or cold, and they’re absolutely NOT scones. Here’s how to make them!

1 or 2 handfuls of sultanas

1 or 2 beaten eggs (depending on the mixture)

Sieve the flour into a bowl, and then add your butter. Rub in finely together. Add the sugar and sultanas, and give it a good mix. Add one of your eggs, and if it’s too dry add the other egg. Roll the mixture out onto a floured board or worktop, and cut into circles using a cutter of approx. 2 inches. Then cook on a greased pan (medium heat) for around 5 minutes per side. Keep an eye on them: if you don’t cook them for long enough they’ll be raw in the middle, but cook them too long and they’ll be dry. When they’re done, dust with a sprinkling of castor sugar. Enjoy!

How to make bara brith

Next up, the classic bara brith. It’s sometimes known as speckled bread, because that’s what the name translates as in English, and traditionally you eat it at tea time smothered in butter. Here’s how you can make it…

Soak the fruit mixture and the sugar in (strained) tea, and leave it overnight. When you go back into the kitchen the next day, preheat the oven to 170C. Line a 2 lb loaf tin with greaseproof paper in preparation. Mix the remaining ingredients into the fruit/sugar/tea mixture, and beat well. Pour it all into the loaf tin and whack it in the oven for around 1.5 hours, or until a skewer comes out clean. Use this time to trim the hedge, catch up on the soaps or dust the fireplaces.

How to make Welsh rarebit

It’s more than cheese on toast – Welsh rarebit is a traditional dish that’s perfect for any meal, or even just a snack. It dates back to the 18th century, and has all sorts of other amusing names: Blushing Bunny, Hot Brown, Buck Rabbit and more. You can make it yourself following the below recipe…

4 slices of bread, each toasted on one side
Pop the cheese, butter, Worcestershire sauce, dry mustard, flour and pepper into a saucepan. Mix together and add your tipple (or milk) of choice. Make sure it’s not too wet. Stir over a little bit of heat until it’s melted and become a quite thick paste. Stop stirring and swivel it around, then leave it to cool. While that’s chilling out, toast the bread on one side only. This is very important, we promise. Then, spread the sauce you made earlier onto the untested side, and brown under a grill. You can even add more cheese on top – we won’t tell anyone!

How to make cawl

As we mentioned earlier, cawl has been referred to as the national dish of Wales. It technically refers to any kind of soup, these days, but traditionally cawl Cymreig contains lamb or beef with loads of vegetables. Recipes date as far back as the 14th century! For some wintery goodness, follow the below recipe…

1 kg lamb neck bone, cut into 5cm chunks (get the butcher to do that bit)

As a bonus, this recipe is gluten free. Without the cheese, it’s also dairy free!

Pour 2 litres of water into a (big) pan – or maybe a Dutch oven or stock pot – with some salt. Bring it to the boil and add the whole onion (peeled) as well as the lamb. Then bring it back to the boil and skim any scum away from the surface. Leave it to simmer on a medium heat for 10-15 minutes, or until the lamb is absolutely definitely cooked.

Using a slotted spoon, take the lamb out of the pan/pot. Put it on a plate and leave it to cool. While you wait, prepare the veg: peel the swede, carrots and parsnips. Chop the swede into 1cm chunks, and the carrots and parsnips into 1cm slices. You don’t need a tape measure, just do your best. Peel the potatoes – chop them into 4cm chunks. Add all of this to the pan as you go.

Strip the lamb meat from the bone, and put the meat back in the pan with everything else. Bring it back to the boil, then simmer for around 15-20 minutes. In the meantime, cut the leeks into 1cm slices. Add the leeks when it’s done simmering, and then boil and simmer all over again for around 10 minutes. Or, take it off the heat and add the raw leeks in when you pop it in the fridge ready to enjoy overnight. To serve, just gently simmer it until it’s warm and you’re good to go!

Now, it’s not for everyone. But laverbread is a typical Welsh recipe so you may as well give it a go! It isn’t actually bread, though you can put it ON bread. It’s actually seaweed. Here we go…

Rinse the seaweed in clean water, and then bung it in your slow cooker for 6 hours. If you haven’t got a slow cooker, you can just simmer it on a low heat for the 6 hours instead. It’ll turn into a dark pulp, which you can then mix with the olive oil, lemon juice, salt and pepper. Pop it on some hot, buttery toast and enjoy.

Hopefully now you’re armed with the top 5 Welsh recipes, you’ll be able to throw the best themed parties, or really impress your mother-in-law when she comes round for Christmas. Best of luck!