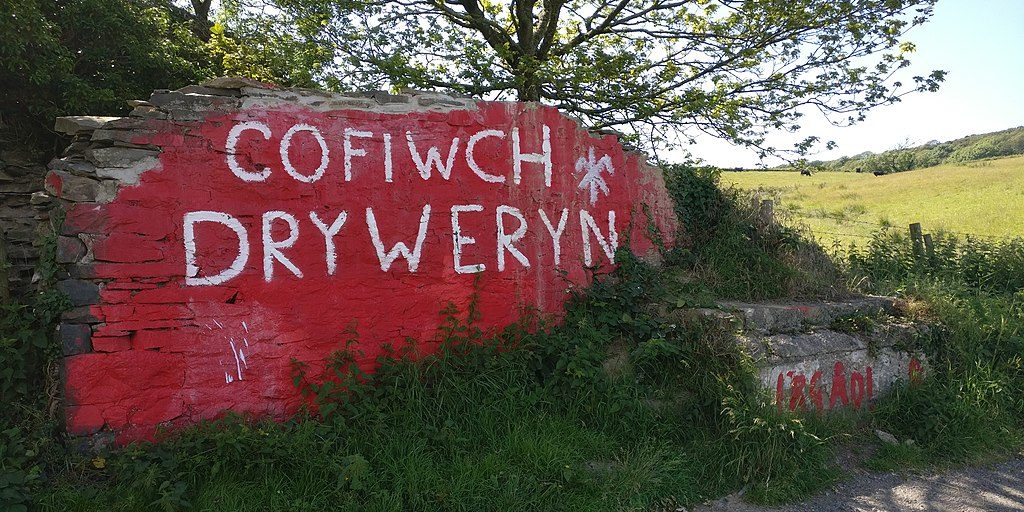 Last August was a key moment in Welsh culture as we saw the iconic Cofiwch Dryweryn mural in Llanrhystud Ceredigion vandalised. This important mural was originally painted in the mid 60’s by the renowned Welsh author and academic Meic Stephens, as a protest against the decision to drown the Tryweryn Valley in order to provide water for the people of Liverpool. Despite all his literary work, Meic Stephens swore: ‘This is my most famous statement, my most eloquent poem, my most important political act’.

The response to the vandalization of this mural inspired actress Mari Emlyn to write a bilingual book,  ‘Cofiwch Dryweryn – Wales Awakening’, published by Y Lolfa.

“We are indebted to the group of young people who went and rebuilt and then repainted the wall. Perhaps the vandals did us a favour, as a mass patriotic awakening has snowballed as a result of their heinous act. Even when some of these new murals have been defaced, the Welsh people have returned quietly, and with dignity, to repaint their tributes.”

The book captures the story of the newly painted wall alongside 32 other walls painted by individuals, school pupils, families and other anonymous artists. Amongst these striking photos is an image of a wall in Chicago! Many members of the Chicago Taffia were born and raised in Ceredigion and they decided to join the Welsh back home and show their support, telling Yr Enfys:

“We painted the mural at the Pleasant House Pub, 2119 South Halsted Street Chicago to show our support. I can’t think of a better location in Chicago. The Pilsen area is well known for murals from many different nationalities and Cofiwch Dryweryn fits right in with its surroundings”. Dave Parry, Chicago Taffia.

Also featured is Emyr Llywelyn who was imprisoned for a year for his part (with Owain Williams and John Albert Jones) in trying to stop the development of the dam in February 1963. There’s also a chapter by BBC radio and television presenter, Huw Stephens, the son of the original mural painter Meic Stephens.

If you have painted walls or been inspired to paint your own walls, please share your images with us on Twitter @cymruarbyd and Facebook Wales International/ Cymru a’r Byd.

You can read more about the book in our next edition of Yr Enfys  and you can purchase a copy of the book for £7.99 at www.ylolfa.com