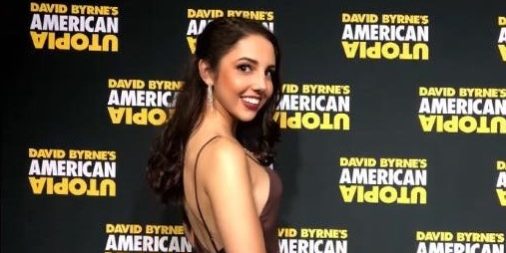 Our role here at Wales International is connecting the #WorldWideWelsh, we’ve been doing it since 1948. Now, more than ever we believe it’s important to stay in touch, share our thoughts, look out for each other and also share some positive news about what the Welsh are getting up to in all corners of the world. This week we caught up with Chloe Wilson who’s currently living and working in America.

First of all Chloe, tell us a bit about yourself..

Well I’m from Porth in the Rhondda, the South Wales valleys. I was raised in the Eisteddfod culture and loved it. I started doing the ‘llefaru’ the recital at the age of 4, then solo’s, duets the choir. I was a member of the Ysgol y Cymer choir and we competed in the Llangollen International Eisteddfod. I knew from an early age that I wanted to be on stage.

So how did you end up in America?

A teacher in school told me about the American Academy in New York, so I decided to audition for them in London. I was accepted and I was so excited, I’ve always been obsessed with musical theatre and had this dream of being in Broadway. It wasn’t that easy, I hadn’t realised how expensive American school’s were! The tuition was about £40,000 plus accommodation!

Waw! How did you raise the money?

I was really lucky that my Gran helped me out and then I did lots of concerts and events. I also tried my luck and sent letters to every famous Welsh person I knew of asking if they could help! Fortunately, Michael Sheen got back to me and he helped me financially and we’ve become friends now which is just amazing.

How did you feel when you arrived?

I arrived in New York in 2016 and it was quite a shock going from Ysgol y Cymer to NYC, but it was amazing! I loved it. I didn’t know anyone else here, but it’s an international school so we were all in the same boat and it was easy to make friends. Everything was so big and so busy and the campus itself is by the Empire State building

Did the other students know about Wales?

Not really! We’ve got more work to do to get ourselves out there but I liked educating them. They were always intrigued by my accent, I never realised how fast we talk until I got here! People I meet say they can’t place me, I’ve had people telling me that they think I’m Indian, Jamaican and Irish! I’ve had to work on my accent to get work, I had to talk a lot slower and stop rolling my r’s!

What have you been doing since you graduated?

I graduated in 2018 and since then I’ve been doing loads of auditions and taking extra singing lessons. I did a musical in 2020 called The Blaze, it was the New York Premiere and I played one of the lead roles which was great. I’ve done a few student films and also lots of adverts like hair and make-up commercials which are always fun. I’ve also done some Shakespeare shows and myself and my friends have started our own theatre company and we perform comedy shows in bars and so on, lots of variety!

Is it easy to get work in New York?

You have to be proactive and hardworking but that’s in my blood. I’m constantly auditioning but generally it’s ok and I’ve been quite lucky.

It’s pretty bad in New York, it’s been really badly hit by the coronavirus as you’ve probably seen in the news. I’ve actually moved to Boston for the time being, my boyfriend’s family live here and they’ve kindly allowed me to stay here. Like everywhere right now, we’re all in limbo and there’s no work. We don’t know how long it’s going to last, but the situation in New York itself is scary. It’s so important that we do reach out and help each other wherever we are in the world right now. We need to stay in touch and keep safe as it’s a really strange and worrying time. Technology is such a help right now.

When you’re in New York you enjoy the vibrant Welsh scene. Tell us about this….

Yes, I recently joined New York Welsh and I do a lot of singing and reading for them too. I think there’s about 400 members and people from all walks of life; actors, journalists, conductors and many who just identify themselves as Welsh. It’s like a home from home, we’re like a family and it gives us a sense of belonging amongst all the chaos and it’s a great support network too.  We meet at the Liberty, the owner of the pub is Welsh and he’s converted the downstairs into a sort of hub for us which is really cool! The organisers are amazing, we’ve had talks from people like Mathew Rhys, Erin Richards, Michael Sheen and so. I look forward to catching up with the Welshies when this is all over.

Do you plan to stay in America?

I do miss home, I miss my family and my friends and I try to come back once or twice a year if I can. I was meant to be coming home for a wedding in the summer, but we’ll see. I want to stay here for now. I love the work ethic and there’s more opportunities here for me. I don’t feel like I’ve had my full experience here yet so as long as I can get my visa approved, I’ll be staying here for the time being.

Broadway. I want to do big shows. I love the buzz of live shows.

Finally, what’s your tips for any aspiring young performers from Wales who want to follow the same path?

Don’t ever think that it’s impossible or that it’s too big for you. Follow your dream and give it a go. I’ve managed to get here and I’m doing the things I was dreaming of when I was in school, so you can too!

Diolch yn fawr – a massive thank you to Chloe for taking time out o talk to us. We look forward to following your journey in New York. Check out our video message from Chloe on our social media pages.

If you’d like to feature in the blog or send us a video message email us on marketing@walesinternational.cymru