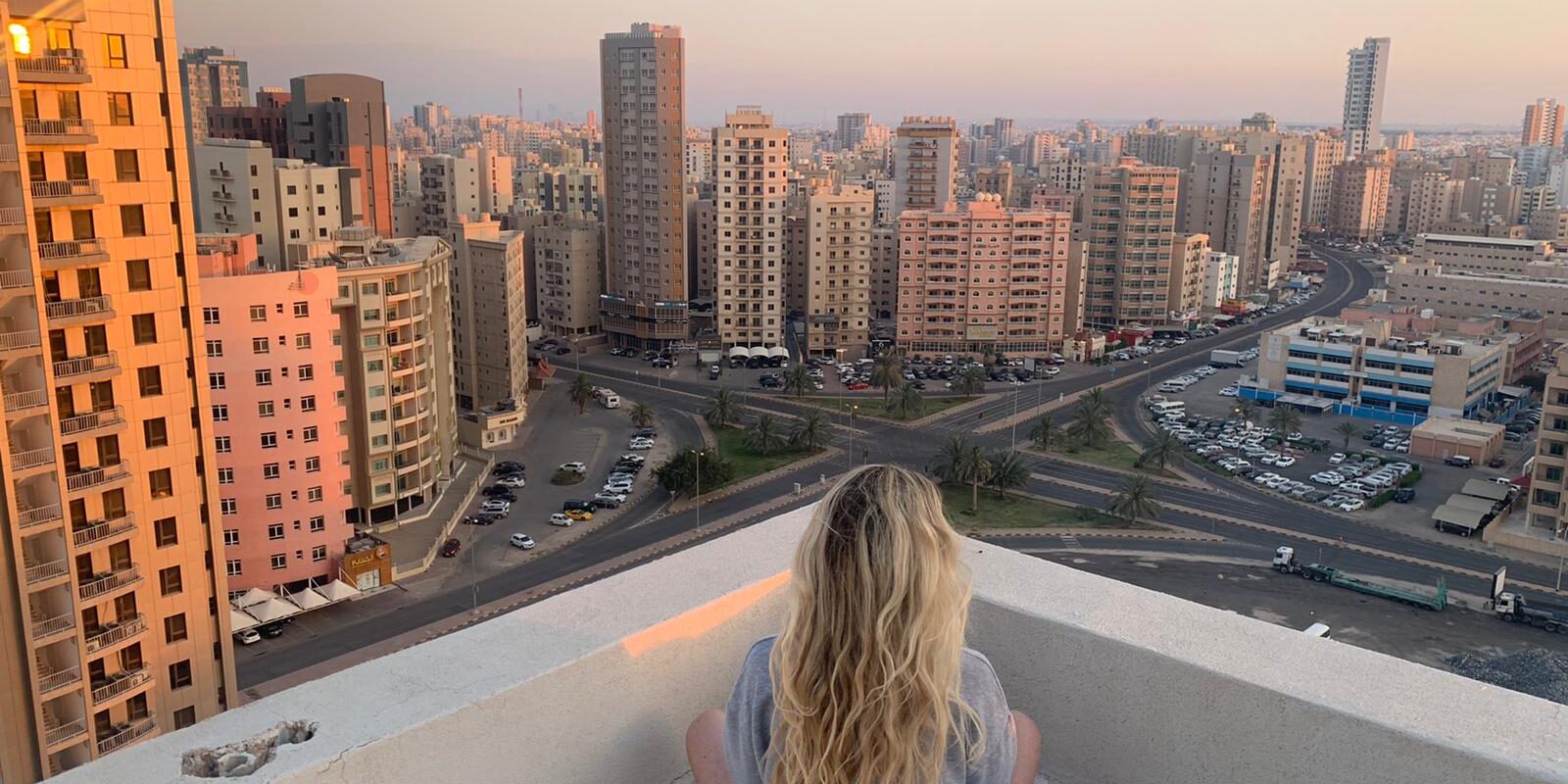 Eight years ago Lynne Hughes from Ceredigion was offered the chance to swap Wales’ mountains and rain for Kuwait’s deserts and camels. She’s now a fitness and dance instructor working with some of Kuwait’s Sheikha’s. We arranged an interview to learn more about her story.

Where are you from?

Originally from Penrhyncoch by Aberystwyth. I went to Ysgol Penrhyncoch and then to Penweddig Secondary School and had my education through the medium of Welsh.

You work in the fitness world, how did you get into it?

I always enjoyed fitness in school and had done a few dance classes in the Arts Centre in Aberystwyth. After leaving school I pursued a degree in BSC Sports at Bangor University, North Wales.

In 2007 I moved to Cardiff to broaden my horizons. I had an incredible experience working in a gym, Motion Control Dance in the Barry as well as working with Rubicon Dance during my apprenticeship with them. It gave me the opportunity to teach dance in retirement homes, schools, and all sorts of other places.

How do people benefit from dance and fitness?

There are practical benefits of course, but they also help build confidence too. A great example of this was when I worked with Rubicon Dance, I had the opportunity to work with a group of young boys in an area of Cardiff. Both the school and their peers had labelled them as ‘bad boys’, but during the sessions I ran they transformed. It was because someone invested time in them and gave them the opportunity to be creative, they developed so much as individuals.

How did you go from Cardiff to Kuwait?

A colleague in a gym in Cardiff sparked the whole thing. I was given the chance to work with him in an exclusive holiday camp for A-Listers in St Lucia, and then when he moved to Kuwait I had an offer to work there too. Like a lot of other people, apart from the war, I didn’t know anything else about the country. After a bit of a google search to find out exactly where Kuwait is on the map, I went for an interview in London and got a job in a camp for children as an instructor to begin with. The plan was to come home after that, but I was offered the chance to stay. 8 years later and I’m still loving it here!

Completely different to Wales! It’s extremely hot, in the 50s sometimes and obviously there are no mountains. I have plenty of freedom in what I can do but I do have to think about what I wear, I obviously have to be respectful of the culture.  The arts are a new concept here too, the opera house is new and the occasional concert has started to be put on, but they’re very different. There was an ABBA tribute here during Christmas time, so many people were excited, but we weren’t allowed to dance during the performance and that was strange to me. Groups of people were against the concerts and campaigned to have it cancelled as they deemed it inappropriate. The culture is very different here and holidays such as Ramadan ask for more sensitivity and planning, but it’s a great country full of wealth and opportunities.

Have you come across any other Welsh people in Kuwait?

Yes! One of my best friends here is from the Rhondda! I recruited her to come out here and work in the fitness industry. There isn’t a Welsh society here but there is a very international atmosphere. I work in an exclusive resort as a fitness instructor so I have colleagues from France, Spain, Brazil, New Zealand, Australia, Egypt, The Philippines, Pakistan and India.

How do they react to Wales and the Welsh language?

They didn’t know about Wales until they met me and my friend, but then they were interested to learn more. We speak Welsh with each other and they’re amazed by it, especially when we throw English words into the mix!

You teach in a very exclusive complex, what sort of clients do you have?

Yes, it’s an incredible place! The facilities are amazing. I instruct a lot of different people, business people and regular people, and recently I realised that I have two Sheikha’s on my books! I didn’t know that they were Sheikha’s until about two months ago because they’re so low-key and I just get on with my work because I love it. I just want to help people so I don’t really look into who my clients are, I treat everyone the same. I think that’s the thing that appeals to them, I’m a Welsh girl from Ceredigion at the end of the day! During Covid-19 I’ve been teaching them online, so the Sheikh’s have been in my living room!

Is it true that dance and fitness are like an international language and that it’s possible to teach those skills anywhere in the world?

Yes, dance and fitness unite people on so many levels.  It’s slightly different here, but as long as the cultural needs are met then barriers are easily overcome..I have to consider things like making sure the shutters are down for the women only sessions so that men can’t see in.

Yes, but I enjoy my life here. I miss my family and friends, the colours and the seasons in Wales, everything is so beautiful there. I miss the rain too in a totally bizarre way. Kuwait has a very different landscape to Wales, it’s dry and everything is beige! I still get excited when I see the sand and the camels but it’s an entirely different world to Wales’ green mountains and the sheep!

Many thanks to Lynne for giving us an insight into her life and adventures in Kuwait. If you’d like to share your experience with our readers contact us at marketing@walesinternational.cymru