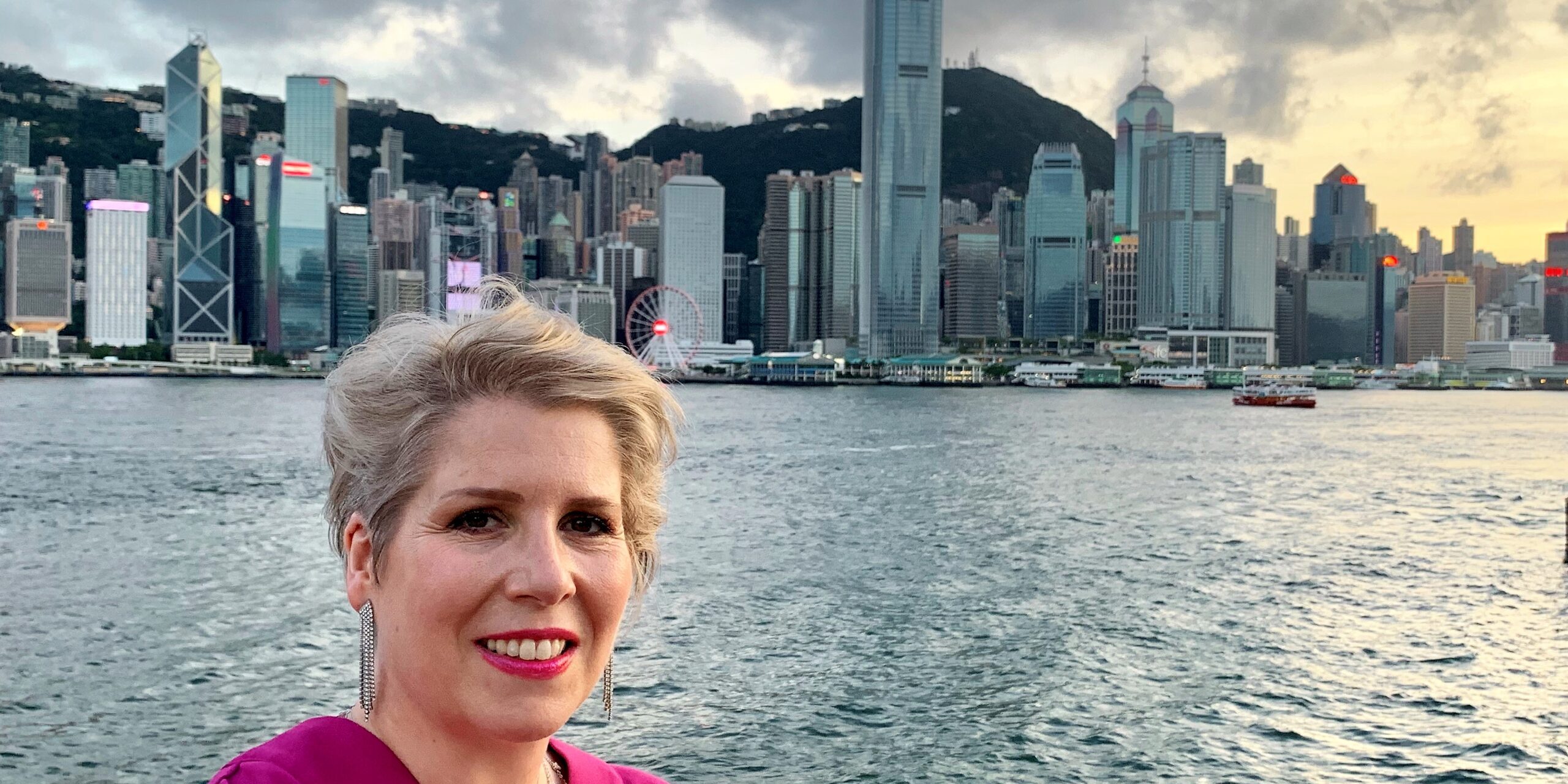 Born and raised in a rural North Wales village, Heledd Williams settled in Hong Kong over 14 years ago and is about to start a new job as an Advisory Teacher for the Hong Kong Government’s Education Bureau. We organised a chat with her to hear about her journey from North Wales to Hong Kong.

Where are you from originally?

I come from a village called Betws yn Rhos in North Wales. I went to the primary school there; it was a tiny school but a very happy one. I remember having a fantastic teacher called Mr Morgan, he was brilliant and had a huge influence on me. I then went on to study at Ysgol y Creuddyn near Llandudno.

How did your career develop after leaving school?

Where my qualifications are concerned, I have a very chequered history – it’s been far from a straight line and that’s ironic because now I work in the world of education. I didn’t pass my A-Levels, but I took a secretarial course at Llandrillo Technical College in Rhos-on-Sea before working as a copy-typist inputting weekly news for various papers in North Wales. As well as proof-reading I also wrote articles. Writing short stories is still one of my interests today, last year I was awarded a ‘highly commended’ in a competition, I’m very proud of that. I went on to study business and finance before pursuing a degree in business administration. I then worked as a legal secretary for 10 years. A zig-zag journey like I said!

When did you decide to venture into the world of education?

When I was 35, which is really old! I was bored with the law industry. I was doing a part-time PGCE and still working at the same time, and that was hard. Very early on I could see the problems within the UK education system and that’s when I decided to move to Hong Kong, it’s been 14 years now.

What sort of problems did you see?

The system more than anything. As a new teacher, it was difficult to get a permanent job in a school as it was very competitive. There were also major behavioural management issues in the schools themselves. After reading that there were more opportunities in Hong Kong, better pay and working conditions, and an amazing opportunity to expand on my experience as a teacher, I decided to move here. I can still see problems in the UK system today, so I have no regrets.

How was the process of moving to the other side of the world?

The women in my life all encouraged me to go for it, but interestingly, I found that the men were the ones to say it was a bad idea. I think women are braver by a long shot! I sold my house, packed everything up and went! Within a fortnight of being there I knew I wanted to apply for permanent residency when the time would come, which was seven years later.

What’s it like being a teacher in Hong Kong?

Until the middle of July this year, I was a Native English Teacher employed to teach English to children aged 7-9. Because English is a foreign language to the children I co-teach with a local teacher (‘Local English Teacher’ – LET). If there’s a word that the students don’t understand such as ‘strange’ which is hard to convey through actions or with flashcards, the LET will explain to them in Cantonese.

Have you learnt Cantonese?

Oh no! It’s just so hard! In the past year I’ve started to learn Putonghua (Mandarin) and that’s enough of a challenge!

Tell us a bit about your new job…

Well, after working in the same school for over 12 years through the Native English-speaking Teaching Scheme I’m about to start a new job as an Advisory Teacher to the Government here. A hop, skip and a jump forward but I got there in the end, and I’m looking forward to a new challenge!

Do the local people know about Wales?

When I joined the school I did an assembly introducing myself and Wales, a country 6,000 miles away. No one had heard of it but when I showed the Welsh flag the students got very excited, the dragon is an important symbol in Hong Kong and China. They were shouting ‘Dragon! Dragon!’ in English.

Why do you think there’s such a lack of knowledge about Wales?

Maybe the marketing is to blame, and Wales is a small country far away. Some adults know about things such as Welsh lamb, because Wales makes a big effort to market its lamb, and they know a bit more because of the country’s success in the sporting world, but nothing else really. Wales needs to market more of the tourism elements, its success and its produce, internationally so that the world will pay more attention.

Have you come across any other Welsh people out there?

There’s a Welsh male voice choir, and I’ve watched them perform but they said at the time that none of them spoke Welsh! Because the locals and the expats from other countries are so friendly it was easy to settle and make friends quickly, so I haven’t really searched for a Welsh community here.

I’d imagine the lifestyle in Hong Kong is very different to life in rural Wales?

Yes! Hong Kong is fast, busy and very dynamic, there’s always so much to see and do. But saying that, Wales is my home and I know I’ll come home to retire. When I’m ready to slow down and relax, Wales will suit me better.

I miss the language, and of course I miss my family. Hong Kong is perfect for me at the moment because it offers me a wealth of opportunities and I have a very good job, but one day I’ll be back in Wales to stay for good.